On the hottest days of summer, a simple, loose dress is nearly bearable to wear. In fact, a simple loose, cool dress with some shoulder coverage to prevent sunburn is something like a holy grail for me.
Have I made this legendary garment? Not yet, but here is an attempt in 3 stages. The pattern is Colette Georgia
Best version, #3 - The Teatowel dress 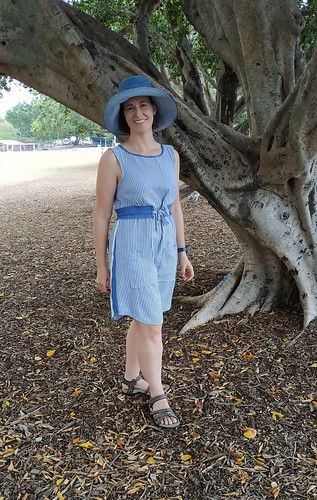 I made this dress from a stained tablecloth that was left behind in my daughter's share flat. Despite the fact that I have a large cupboard full of beautiful fabric, this cotton/polyester (burn test) randomly striped fabric had an inexplicable appeal that insisted that I turn it into a dress. It took a lot of fabric wrangling including piecing.
I like it a lot and have worn it every weekend since its inception. Its resemblance to a tea towel is mysteriously appealing to me.

It wasn't my first attempt. 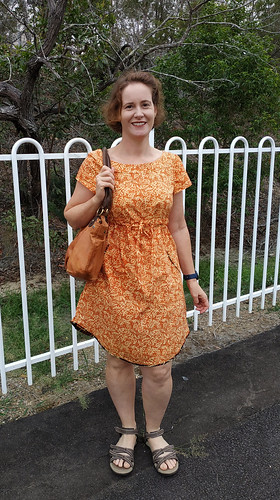 This orange print version was originally straight from the pattern (other than 5cm lengthening of the skirt), and has pros and cons. I like the sleeve coverage, but it's gappy at the back bodice, pulls at the front bodice. 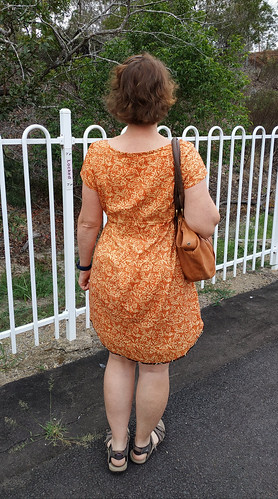 It was highly unflattering due to lack of waist definition until I added an internal empire waist casing and drawstring. 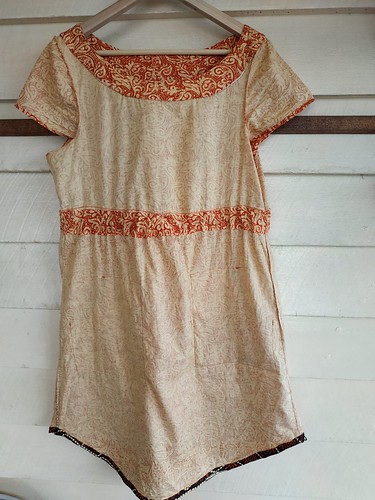 The fabric is a cotton sarong with a border print - I've used the border at the pockets and hem only as it was quite a thin border and a strong contrast. 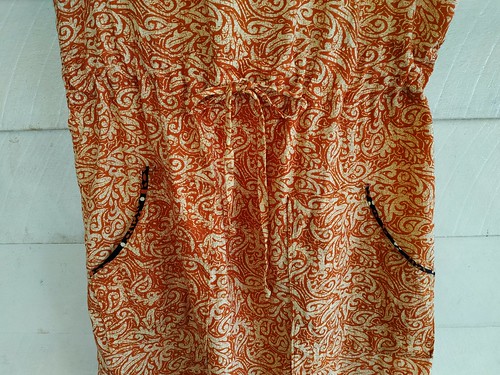 The pockets and hem facing were  my own addition, and make it practical for an around-the-house-dress that one can also wear for semi-public events such as collecting someone from the train station. I've worn this a few times, but it is currently living at my daughter's flat as a just-in-case outfit if I choose to stay overnight unexpectedly. It's clearly not a favourite.

I made another version, using a lighter fabric, a souvenir handwoven cotton sari from Sri Lanka.
My adjustments were:
Narrow the back bodice
Full bust adjustment using the pivot method (side bust dart and lengthening bodice)
Add back skirt darts to reduce the gathering needed at the added outer empire waist casing
Add pockets
Apply neck facings to the front and hand embroider these and the pockets with cross stitch. 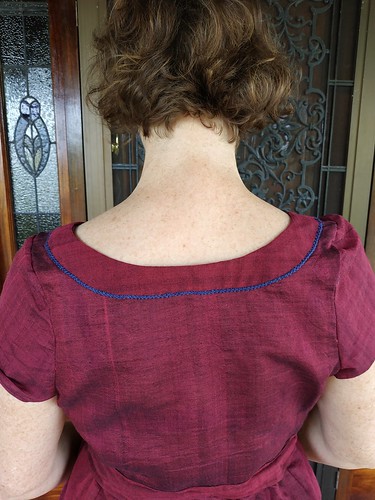 This version was better than the orange version but had a few problems. 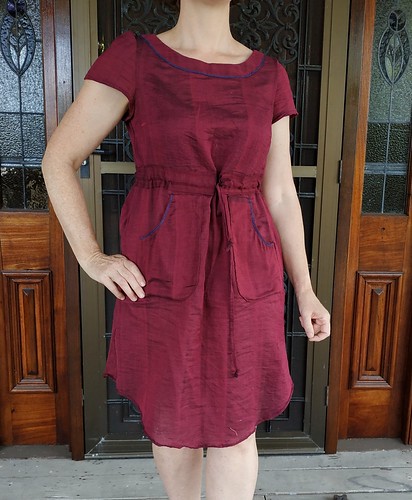 The most troublesome was that I had not made a good match of fabric to pattern.
This is a lovely but temperamental fabric, being loose woven. Unfortunately in wear it  proved a little transluscent.Even worse, the fabric is a little rough, so it clings to any petticoat in an unsightly manner. Unfortunately I only discovered this after I'd sewn a  bias petticoat  from the same fabric, and this petticoat can not be worn under any other garment either, due to grabbiness.
All the seams are french, but this was not sufficient. On its first wear, the fabric strained at the bust - despite fairly generous ease, and I had to repair this with additional fabric under the stitching.

To relieve some of the pulling, and to turn this dress into a nightie, I removed the sleeves, and again, I've worn this garment quite frequently, but only in the house. It is not even up to collecting someone at the train station and not getting out of the car!

The teatowel dress had a few advantages, the first one being that the fabric is thicker, although equally loosely woven. Due to this, I finished the pieces on the overlocker prior to constructing the dress. 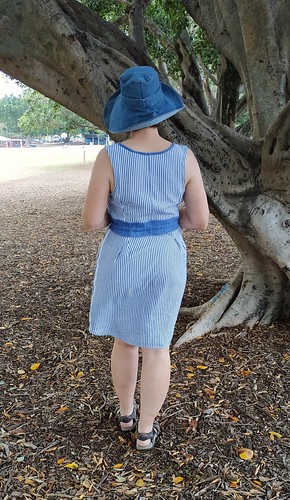 I added 1cm to the armscyes for additional coverage, and bound the armscyes, turning inward and the neckline, turning outward, with bias trim made from the widest blue  stripes of the fabric, I used the other wide blue stripe as the external casing at the empire waistline. 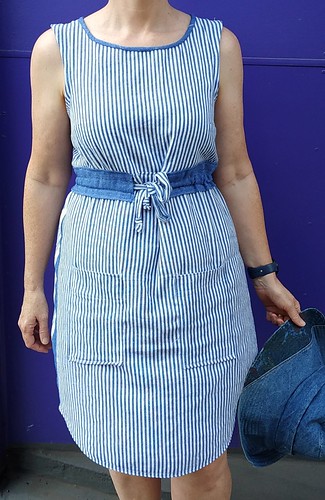 Unfortunately I did not have sufficient fabric for the shaped pockets I used for the previous two versions, but I managed to squeeze out patch pockets which are sufficiently practical.
Overall, I'm happy with the dresses, but am amused at myself for thinking that I could make a dress with minimal shaping that I would actually wear. Note to self- don't bother making dresses without waist definition!
Posted by kbenco at 14:58

Third time luckily and good to hear that the previous 2 versions are getting some wear.

Your blue dress looks very pretty and sounds so cool with the humidity we are having. Like you boxy is not a garment I tend towards at all.