Although I am not in Carolyn's league with my multiple uses of a men's shirt pattern, I have made 9 shirts from shirt pattern Vogue 8096 since November 2011. My husband was suitably pleased with all the shirts and I had no reason to buy another pattern.
This didn't stop me from buying the new release Vogue 8889. I thought Vogue should be encouraged for including a man shirt that is cut slightly differently and has actual design details, and perhaps I was just a bit tired of V8096. 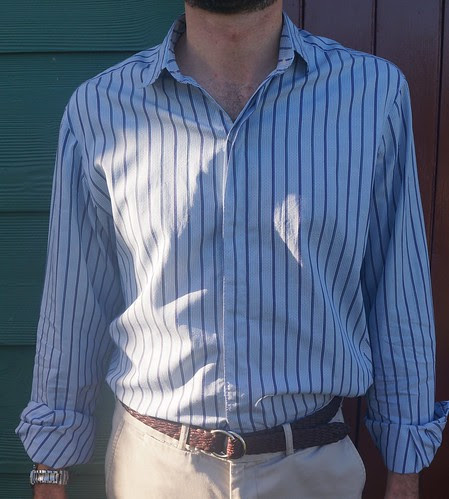 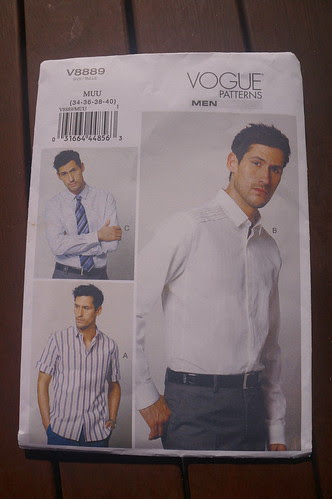 However, in my sewing room, most of the design details included were rejected. He vehemenently rejected the cute little pintucks on the yoke, which I expected, and has a strong  dislike of button down collars, so the concealed buttoning undercollar was not an option.
So what is left that makes this shirt different from his other shirts?

1. Side panels.
These are shaping panels on the back, but merely decorative at the front. I cut them on the bias to meet as chevrons at the side seams, as I felt that all this extra work should actually be noticeable. 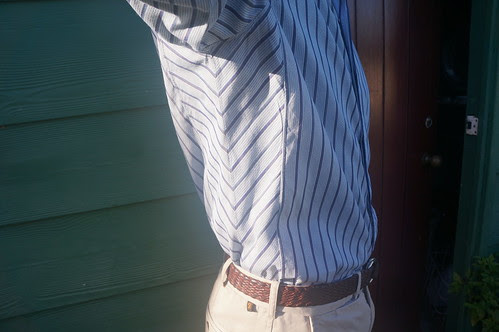 2. Tiny little collar
This is not my favourite collar, but it is slightly different and looks OK once I used collar trimming and shaping techniques from David Page Coffin's Shirtmaking book.

3. Concealed buttons by a Chesterfield front 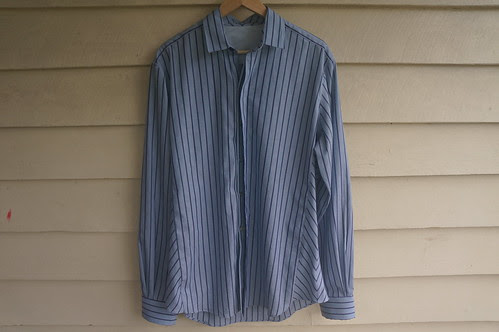 - this is very easy but looks as if you have done something clever. You need to stitch down the outer fold in between the buttons (I did this by hand, catching only the underlayer of the folded fabric) so that the fold does not flap open and display your buttons in this loose fitting shirt, but this was the only omission in Vogue's instructions in how to construct this sort of placket, and would not be necessary in a close fitting shirt.

What is not different is the fit. This shirt says it is loose fitting, whereas the earlier pattern does not mention fitting ease at all, but both shirts are quite similar in girth in a size 38.   I think this is a mistake on Vogue's part. Shirt 8889 could quite easily be much more fitted, having shaping in the seams in the back  and if I make it again, I will taper to a 34 in the body of the shirt. I object to sewing shaping seams when I don't need them.

Finding this shirt rather dull, I added some play with the stripes. I cut the front stitching line of the yoke on grain (and on stripe). This was a tip passed on to me by Ann Rowley (currently on BBC2 being a super sewing star in the Great British Sewing Bee), who mentioned in a shirtmaking thread at Stitchers Guild that this would automatically make a 2 part yoke chevron at the back.
Look! 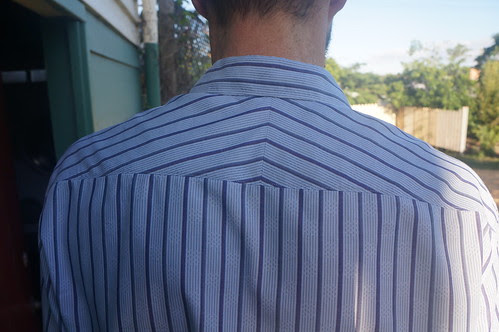 David Page Coffin mentions this technique in his Shirtmaking book too. His take "a distinctly British touch that looks quite odd- but not uninteresting to the American eye" demonstrates to me that this Australian eye has British tendencies. I think this looks rather smart and makes stripe matching at the sleeve very easy. In keeping with the chevron theme, I cut out the inner collar stand in two parts so that I could have a centre back chevron here too.

I used the sleeve plackets from the earlier Vogue pattern. 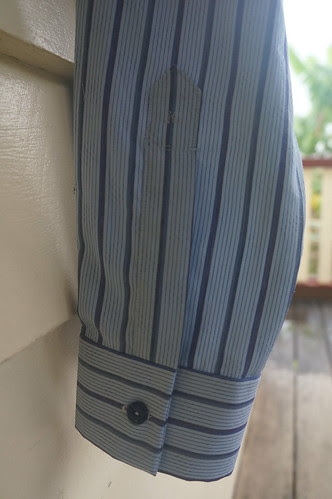 I have cut out a template with 1/4 inch seams from the earlier pattern, and could not bear to do it again for something with only minor differences, that will be worn rolled up at all times anyway. I labelled the shirt here for my own amusement.

The shirt construction did have a few hiccups. I was forewarned by the review by Peter of Male Pattern boldness that this pattern has drafting errors. Although these were less striking in the size 38 than in Peter's size 34, like him, I found that the collar stand centre back was off centre (about 3mm). I also found that the back yoke did not line up with the lower back and felt that the sleeve was too wide for the armsyce seamline.  There was no finished garment measurement for the neck nor waist circumference.
Shirts are fiddly and require precision sewing. There are no wow factors in a conservative man's shirt, so you have to take pleasure in stripe matching, so these errors just make the construction more difficult than it needs to be.
Overall I quite like this pattern. I appreciated the inclusion of such finishing details as instructions to flat fell some seams ( I used a flat felling foot and 1/8 or 1/4 inch seams rather than Vogue's, but still...)
This shirt was intended as a trial garment. My husband does not participate in fitting, and does not like to model for the blog, but kindly agreed to some snaps at the bottom of the back stairs when on the way to work this morning (please excuse background unsuitableness and contrasty lighting, I have to work with what I get). Unfortunately, I think this shirt is too loose to show any of the non-yoke design details. 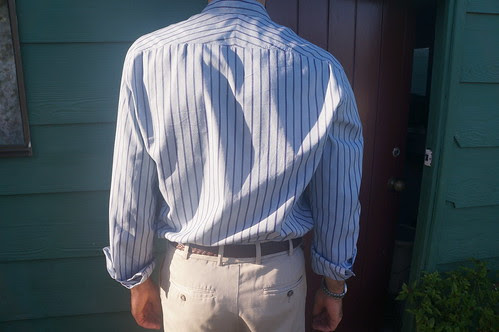 You may see another version of this shirt with fitting changes, but this is not at the top of my list.

Very nice, and very well made shirt! I completely understand about the DH's non-participation in fitting or modeling, as mine is the same.

Absolutely, very nice shirt! I'm impressed by the stripe matching at the yoke/sleeve, sleeve plackets, and the collar with the outer collar band...and the chevrons!! Nice touch too with your initial/label!

Gosh, this is fantastic! Very smart and professional. You have done a great job with the chevron effects and stripe matching too.

Now that is so much better than RTW. Every detail is perfect.
Just perfect.
Oh well, DH will have to wait in the queue for his next perfect shirt :)

Very very impressive! The stripe matching is sheer perfection. The shirt looks so high end and professional. I think I should add this pattern to my wishlist. The shaping details of the pattern look really good :)

and thank you for the mention. I also wanted to tell you that your comments are always so generous and kind. I think you are a very thoughtful lady.

Who says you are not in Carolyn's league? Great shirt and the side panel details rise above the ordinary.

Wow! You matched the stripes beautifully.

Great use of stripes. I particularly like the yoke stripes matching the sleeve stripes.

How creative--and such meticulous workmanship. Beautiful!

Wow! The shirt is fantastic! Your review (and humor) is great as well. I love how you used the stripe detail in the yoke. Too bad he refused the pin tucks, but the shirt looks great and fits him well. I might try this one myself....

Oooh! I love how you added interest with the stripes. This is a sharp looking shirt! And nice to see this pattern sewn up.

What a great shirt! I think the shirts you make your husband are so much nicer than RTW. You always seem to add great details (love the chevroned yoke!) and the quality of your work is totally inspiring.

I tried to shoot you an email with a quick question, but i'm not sure if it went through. If you have a minute can you check or shoot me an email at soisewedthis.blogspot.com and i'll reply back. Thanks for your help!

Very smart shirt and your work with the chevron and stripe matching really makes it.

The new shirt looks great .Love the side panels and how you have matched them with the yokes. Perhaps if your husband realises how many women are commenting about him he will model more !

I love seeing your sewing for men. I recently completed my first man's button shirt. I love your details.